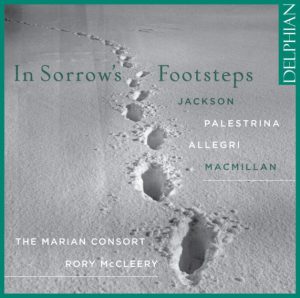 I was recently again surprised by a present from Mr. Hubert Maillard from Switzerland. He sent to me the CD by the Marian Consort: In Sorrow’s footsteps. The CD has a new Stabat Mater composer, Gabriel Jackson from the UK. Thank you very much Mr. Maillard!

Celebrating its tenth anniversary with its tenth recording, The Marian Consort plays to its twin strengths in a lovingly conceived programme coupling two pillars of Renaissance polyphony with twenty-first-century settings of the same texts, including a newly commissioned Stabat Mater by Gabriel Jackson. A range of subplots – Palestrina’s influence on Wagner, Charles Burney’s collecting of Allegri and Palestrina – make this truly a story of interconnections: a path on which the present’s footsteps constantly overlay the past’s. At the centre is Allegri’s Miserere, whose convoluted reception history itself becomes part of the story and whose performance here fully exploits the world-famous acoustic of Merton College’s chapel.
From: https://www.marianconsort.co.uk/product/in-sorrows-footsteps/