As you can see on my Pergolesi webpage, I have about twenty versions of the Pergolesi Stabat Mater. I have several CD’s with the original classical version for two soloists or two soloists and choir and versions with a full-bodied string orchestra. Very special is the saxophone quartet-version (by Saxo Panico) and the interpretation of the Victor Alcántara Trio, they recorded an extended jazz improvisation, in which all parts of the Stabat Mater are used as starting points. The well-known producer Frank Fitzpatrick produced a CD in a kind of hip-hop style for the singer Sasha Lazard, with a Stabat Mater composition by him, based on Pergolesi. The first and last parts of Pergolesi’s Stabat Mater have been used in the soundtrack of the movie “Jésus de Montréal”; the third part (Quis est homo) is used in the soundtrack of the movie “Smilla’s Sense of Snow”; the last part is also used in the movie “Amadeus” and in the movie “Mirror” by Andrei Tarkovsky.
But this wee 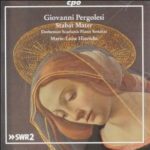 The Stabat Mater of Pergolesi has fascinated me from the beginning: both the powerful lyrics and also the music, which not only underlines effectively, but has independently in itself as well as a great effect. The music is so deeply touching that I felt a great desire to play this on the piano and to rewrite the music. Whilst I was rewriting I had periods of great enthusiasm for the work, yet there were also days, when I could not even continue, because of a deep sadness that had seized me…

You will also find five sonata’s by Scarlatti on the CD. Thanks Romulo and Marie-Luise!