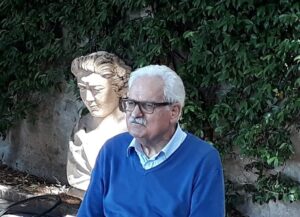 The monk Jacopone da Todi (ca. 1228-1306) is named as one of the most probable poets of the Stabat Mater poem. In 2021 I visited Mr. Claudio Peri in the city of Todi in Umbria, Italy. Mr. Claudio Peri is an emeritus Professor of Food Science from the University of Milan. He and his wife Theresa were born and raised in Todi and have returned to their beloved town in retirement. His thirteenth-century fellow townsman Jacopone da Todi only discovered Claudio four years ago, not in Todi but in a bookstore in California. He came across Jacopone da Todi, Poet and Mystic, a scientific study by the English Evelyn Underhill from 1919. Half of that book consists of poems by Jacopone in medieval Italian with an English translation next to it. Mr. Peri became so captivated by the work of this Franciscan brother that he decided to dedicate the rest of his life to Jacopone da Todi. He even has created a website about Jacopone and GOOD NEWS: the website has now become bilingual, Italian and English! Through the site Claudio wants to spread the knowledge of Jacopone’s personality, thought and poetry. He hopes to enhance the visitors’ understanding and empathy for the great poet and mystic of Todi. You can read about life (and legends) of Jacopone, his poetry, his Stabat Mater, contemporaries and you will find a huge extended database which presents bibliographic references to the most important works on Jacopone da Todi.  This database includes all languages and all forms of publication, including video, theatrical and musical performances, etc. The database can be searched by author, by title (even partial), by year of publication, by language, by publisher and by names of translators in the case of translations.
According to Claudio Peri Jacopones message is universal and of great topical interest for believers of any religion as well as for agnostic or atheist people. You want to learn more? Please visit www.jacoponedatodi.com.